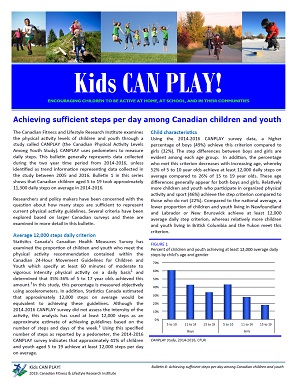 The Canadian Fitness and Lifestyle Research Institute examines the physical activity levels of children and youth through a study called CANPLAY (the Canadian Physical Activity Levels Among Youth Study). CANPLAY uses pedometers to measure daily steps. This bulletin generally represents data collected during the two year time period from 2014-2016, unless identified as trend information representing data collected in the study between 2005 and 2016. Bulletin 1 in this series shows that Canadian children aged 5 to 19 took approximately 11,300 daily steps on average in 2014-2016.Researchers and policy makers have been concerned with the question about how many steps are sufficient to represent current physical activity guidelines. Several criteria have been explored based on larger Canadian surveys and these are examined in more detail in this bulletin.

Bulletin 06: Parents’ perspectives about the availability of after-school programs